It has been reported that Arsenal boss Arsene Wenger has hailed the mentality of Alexis Sanchez. 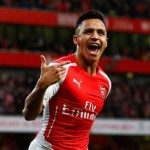 The Chile international has scored eight goals in 15 appearances since joining Arsenal and Wenger has been impressed with his rapid transition to the Barclays Premier League.

“I’m a bit surprised. It’s because he has a particular mental strength,” Wenger said.

“He reminds me of the first generation of English players that I had – Lee Dixon, Steve Bould, Tony Adams, Nigel Winterburn, Martin Keown. This kind who is just ready for the fight.

“It’s natural to Alexis. Every day he wants the ball. He doesn’t walk out, he runs out.

“He has a natural level of energy that is unbelievable. You would love everyone to have that, but unfortunately it doesn’t work like that.

“When you see where he has come from, where he was born, and then he plays for Barcelona and Arsenal, he needs to have something special.”

Arsene Wenger : Arsenal Will Go All Out To Beat Man City!