Reports are out claiming that Arsenal boss Arsene Wenger is happy for Serge Gnabry over his loan move to West Brom. 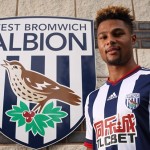 The 20-year-old has not played for Arsenal’s first team since March 11, 2014 due to a long-term knee injury, but he has now returned to full fitness.

“He has had a very tough time,” Wenger told Arsenal Player.

“He was out for over a year and what he needs is competition and to compete at a regular level.

“Here, now, he would maybe not be in the first XI because he needs first to compete.

“We know he is ready to play in the Premier League but we know as well that what is needed for him is to get 25 to 30 games to show that he can produce it on a regular basis and cope with it physically.”