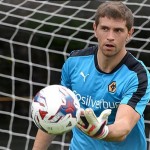 He joined the Championship side on a season-long loan this week after featuring in the Emirates Cup and the Barclays Asia Trophy during pre-season.

“He’s 23 years old now and I believe he’s in the period of his life where he needs to play and show how good he is.

“I’m convinced that Wolves have made a very good loan signing there because he will save them points.”