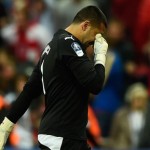 Reports are out claiming that Arsenal boss Arsene Wenger had great sympathy for Adam Federici after the Reading goalkeeper’s howler on Saturday.

The Aussie’s mistake gifted Arsenal a place in the FA Cup final.

After the final whistle, Federici was so distraught that he pulled away from Clarke’s consolatory embrace and rushed down the tunnel.

“Overall the guy carries that with him,” said Wenger. “Once it is done it’s done. You have to live with that. We are not equal in front of that. Some carry that their whole life and some recover quickly and forget about it.

“Time helps better than any ­manager,” he said. “Also to focus on the next game. He will get over that. Even if he had not lost that goal it doesn’t mean they would have ­qualified. We still could have scored another goal. A goalkeeper that doesn’t make mistakes doesn’t exist. Overall you cannot guarantee that nobody makes this kind of mistake. Everyone does. He should be ­comforted about the fact he had a great game.”