Interesting transfer news are out claiming that Arsenal boss Arsene Wenger has made contact with Real Madrid captain Iker Casillas. 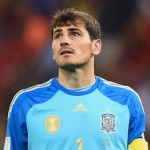 El Mundo Deportivo reported that the French tactician has called the Spanish international goalkeeper to convince him to join Arsenal.

Casillas fell behind Diego Lopez as Real Madrid’s man between the sticks in La Liga last season, but was still Carlo Ancelotti’s first choice in their Champions League-winning run.

The Spanish press are claiming the Premier League is Casillas’ favoured destination, and after a disappointing World Cup campaign with the national side, the 33-year-old may be looking for a fresh start.