Reports are out claiming that Arsenal boss Arsene Wenger says Chelsea ace Eden Hazard can’t be regarded in the elite just yet. 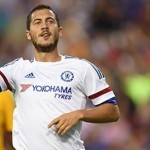 Speaking to ESPN, the Wenger said: “It is all about opinions.

“You have to compare the numbers. I must say players like Messi and Ronaldo still score 50 goals and that is exceptional.

“I don’t like all these comparisons. Everybody always thinks their player is the best which I can understand, but [what] Sanchez did for the first year in the Premier League is absolutely exceptional.

“Hazard is in this category, now to reach the other two or three that are dominating world football at the moment I think it demands consistency which he is still to do.”