It has been reported that Arsenal boss Arsene Wenger insists the Football Association should look into how Chelsea striker Diego Costa escaped a red card at Stamford Bridge. 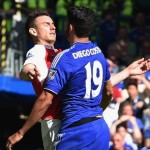 Arsenal defender Gabriel was sent off after clashing with Costa at the end of the first half.

“He [Costa] will do the same again next week and the week after that and he always gets away with it,” said Wenger.

When asked if the FA should take retrospective action, Wenger added: “That is the least they could do.

“Costa can do what he wants and yet he stays on and everyone who responds to him has to be sent off. He hits Koscielny in the face yet he gets away with it.

“I understand referee Mike Dean’s decision to send Gabriel off. He was guilty and should not have got involved but why does Costa stay on the pitch after what he has done?

“Costa is always involved in provocation and he used the naivety of Mike Dean well. It is nothing to do with the strength of a referee. You expect him to make the right decision.” Arsenal Striker Wellington Silva Back To His Best With Almeria