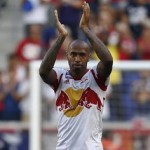 The 36 year old featured for New York Red Bulls in their 1-0 friendly win over Arsenal today.

“Thierry was excellent and showed he can still play to a very high level,” Wenger said.

NYRB coach Mike Petke added: “Thierry was still a step ahead of many of the young Arsenal players and could definitely do well in the Premier League.

“Whether he could do it for 90 minutes every week I am not so sure and I think he would agree.

“Arsenal are still early in their pre-season but I would like to think we could give them a good game when they are at their peak.”

Video: Interview with Nacho Monreal & Is He a Good Buy?