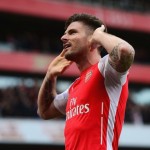 Reports are out claiming that Arsenal boss Arsene Wenger is confident there’s much more to come from Olivier Giroud.

The French international striker twice in victory at Newcastle United on Saturday.

“He is a player who has a good mental strength because at 22 he was playing in division three,” Wenger said. “Now he plays at Arsenal. There is still room for improvement for him.

“He benefits from the fact that he has not started a few games. He has also improved his technical game. Technically he is a much better player and that’s why he scores goals.

“His touch, his link play, his finishing [has all improved]. He takes some images from when he arrived in England and today he is a better player.

“I think [he is one of the best strikers around] because he scores the goals, has a presence and he’s a fighter as well. Above all he is a team player – he fights for the team.”