It has been reported that Arsene Wenger is convinced Wojciech Szczesny will continue to improve this season. 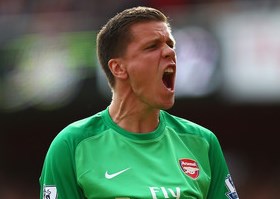 There had been talk that Arsenal would sign a new goalkeeper in the summer but the Frenchman has always had faith in those already at the Club.

“That speculation didn’t come from me,” he told arsenal.com.

“I was always convinced that Szczesny would make it. I rate Fabianski highly too.

“People forget with Szczesny that, at 23 years old, it is like being 18 for an outfield player.

“At 23 he has played two [full] Premier League seasons, one where we finished third and last year when we made 73 points and finished fourth. You would think that he can only go up.”