Reports are out claiming that Arsenal boss Arsene Wenger is using the World Cup as a trial run for Southampton midfielder Morgan Schneiderlin. 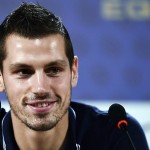 The Daily Mail reported that Arsene Wenger, who is in Brazil working for French TV, watched Schneiderlin in France’s Group match with Ecuador and has commissioned club scouts to keep tabs on the 24-year-old.

Wenger holds a long-term interest in Schneiderlin but wants to see whether he can handle the step up in class at the World Cup.

Members of the Gunners’ backroom staff believe Schneiderlin is the answer to the club’s search for a new holding midfielder but know they will face a battle to lure the midfielder from Southampton.

New boss Ronaldo Koeman is ready to persuade him to stay, particularly with the pending departure of Adam Lallana to Liverpool.