Reports are out claiming that Arsenal boss Arsene Wenger has laughed off Inter Milan’s interest in Lukas Podolski. 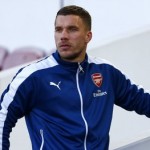 The German international attacker, who joined Arsenal in 2012, has started only two matches this term.

Inter boss Roberto Mancini told Italian news channel Sport Mediaset that the 29-year-old forward is “part of a list of players that we are following”.

However Wenger told a press conference: “That is a joke. Inter Milan are not serious. There’s only talk.

“Podolski is a player of Arsenal Football Club and I want him to stay,” Wenger said.

Asked if the Germany international would still be with the club after the January transfer window he added: “I hope so, yes.”

The Frenchman appeared to rule out the possibility of a loan move for the forward when he said: “I don’t doubt that in some situations players need experience, but that is not the case for Podolski.” James Milner Upbeat Over The Fitness Of Alex Oxlade-Chamberlain