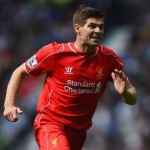 The former England international captain will play his final game at Anfield today against Crystal Palace.

“I would just like to pay tribute to him for a fantastic career,” the manager said.

“For me he is a fantastic player and I would also like to do it because he has remained loyal to his club for his whole career.

“You don’t see that a lot, especially for that kind of quality player he was. It is a special day for English football, for Steven Gerrard and English football, because as well he was a great player for the national team.

“It would have been difficult for him to stay for such a long time at Liverpool and go somewhere else [in the Premier League],” added Wenger. “It is better maybe for him to promote football in America.”

Arsenal Drop Out Of Race To Sign Yann M’Vila Nathaniel Clyne Confident Liverpool Can Challenge For Title This Season