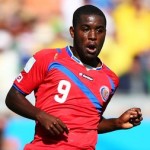 The Mail on Sunday claims that the French tactician is more inclined to loan Campbell to a Premier League club – at least until January – this season.

West Ham United, Everton, Southampton and Newcastle are all interested.