Reports are out claiming that Arsenal boss Arsene Wenger played down their FA Cup favourites tag after victory at Brighton. 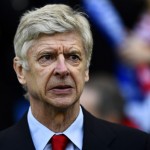 The Gunners were one of the few major teams to avoid a Cup upset.

“With yesterday’s results you would be a bit cautious,” said Wenger.

“The cup is the cup – what you want is to focus on the next round to go through. We have a good experience from last season to know that every round is difficult. The most difficult games were not especially the expected ones last season, so let’s wait for the draw. Of course we’ll fight and we want to retain our cup but there’s too long to go to say [that Arsenal are favourites].”