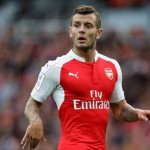 Wilshere has been ruled out for several weeks with a hairline crack to his left fibula, and his misfortune prompted questions in Wenger’s press conference about the 23-year-old’s committed tackling and his tendency to delay his release of the ball.

“You can’t play football without going freely in the challenge,” said Wenger. “And Jack’s game is to provoke with the ball at his feet and go and penetrate. If you take that away you change the player and you take one of his biggest strengths out of the game.

“We are all programmed through our education to respond in a game situation like we are used to. After with age and experience we use our qualities in a more efficient way. But we do not change basically the way we play.

“Jack’s game is to receive, go forward, provoke, release the ball. Sometimes because he has a good little burst, he uses that very well to get out. But sometimes it is a game that provokes maybe more challenges than Gilberto Silva, who just sat there deep and played, or Mesut Ozil, who [dribbles] less.

“Jack is a born football brain. He’s a creative brain. He has no handbrake. But that tells him to provoke in the final third. That’s where he creates all his chances.”