It has been reported that Arsenal boss Arsene Wenger won’t write off Abou Diaby. 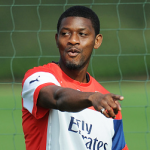 The French midfielder’s battle for fitness continues to elude him despite Wenger claiming in December that the Frenchman would be offered a new deal should he prove himself capable of regular first team action.

The 28-year-old has suffered horrendous luck with injuries that have restricted him to just two appearances totaling 83 minutes in the last 21 months with no discernable sign of improvement sufficient to warrant a return to the squad.

Wenger said: “I will have a decision to make about his contract, yes. He is still injured. At the moment he is not in a position where he will be able to play soon because he is not on the field at all.”