Arsene Wenger has dismissed claims that Arsenal are ‘arrogant’ and ‘naive’ for not signing a top quality holding midfielder. 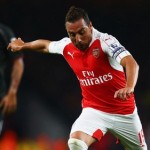 Sky Sports pundit Gary Neville suggested on Monday night that the Gunners have failed to replace the likes of Patrick Vieira and Emmanuel Petit in a defensive midfield role which has contributed to them not winning the Premier League title since 2004.

Wenger continues to operate with Santi Cazorla and Francis Coquelin in the centre of midfield but the Frenchman does not believe he is arrogant for not luring a big character to the Emirates in the mould of a Vieira or a Petit.

“I don’t know what that has to do with arrogance,” he said following Monday night’s 0-0 draw with Liverpool.

“You find all kinds of attributes from this. I’m here so I’m quite used to it and I try to do my job well, which is all I try to do.

“I’ve been doing that for 20 years in England. After that, I leave the judgement to everybody, for them to assess the quality of my work.”

He added: “Everybody has their opinion and everybody is entitled to have an opinion.

‘I could prove to you that it’s not necessarily right, but let’s not go into that debate tonight. When you don’t win, you’re wrong and people always find reasons why.

“Are they the good reasons? I think I have enough experience and intelligence to know when it’s right and when it’s wrong.”