Reports are out claiming that Polish legend Zibi Boniek has blasted Arsenal boss Arsene Wenger over his treatment of Wojciech Szczesny. 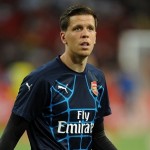 The Poland international goalkeeper will join Roma on-loan this week.

“I spoke to Szczesny and I’d be very happy if he came to Roma. He is an experienced goalkeeper, very tall and has good technique,” Boniek told Italian radio.

“I’ve known him for a long time, as he’s an international. He had a row with Wenger, who froze him out of the team.

“He has a few bad habits, like smoking a cigarette after a game, but these are not very serious problems.

“Szczesny is now second choice for Poland because the Coach wants someone who starts regularly for his club side.

“He will do well at Roma and I’ll call him when he arrives to make sure he knows what not to do in the Capital.

“There’s a big difference between Szczesny and Morgan De Sanctis, as he is on a whole other level. He’s good with his feet and can put the ball straight back into play. If this goes through, Roma will have made a good move.

“I heard Wenger wants him for the future of Arsenal. That seems a bit of a hypocritical comment, seeing as he sent him away by signing Petr Cech.”