Reports are out claiming that Arsenal boss Arsene Wenger was remaining positive despite another ankle injury to Jack Wilshere. 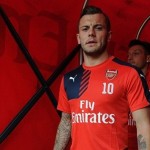 The 23-year-old England international midfielder was withdrawn from the Gunners team for their successful Community Shield meeting with Chelsea on Sunday after sustaining a problem at training on Saturday.

Following the triumph, Wenger spoke of Wilshere’s issue but did not seemed too perturbed as the Gunners now get set to take West Ham United in their 2015/16 season opener at the Emirates on Sunday.

“He couldn’t take part in the game because of an ankle problem he sustained yesterday, at the training ground,” Wenger said after the match.

“We don’t think it’s bad at all, but I haven’t been told if it will be two days or five days.

“I don’t know how long he will not be available but it’s a matter of days.”

Alex Oxlade-Chamberlain netted the only goal of the contest at Wembley as the Gunners won the annual pre-season trophy for the second season in a row.