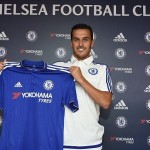 The French tactician admits he thought Pedro was moving to United this week.

He told the London Evening Standard: “It is hard, believe me, to get a deal over the line. It’s difficult as well if you’re not completely inside the deal, to know what happens. Did Pedro not want to go? Did Manchester United not want to spend more? I don’t know.

“It was a surprise to me because I thought he was landing at Manchester but he finally landed in London. The story was out for such a long time that I thought he was going to go to Manchester, but then suddenly in 24 hours [he joined Chelsea]. We’ve seen that before on the transfer market. I don’t know what happened exactly.”