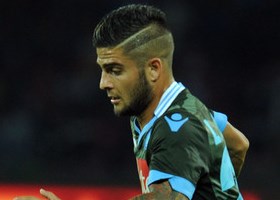 The Italian U21 international attracted interest from Sunderland and Manchester City over the summer.

Wenger, ahead of Arsenal’s Champions League tie with Napoli, said: “He [Insigne] is mobile, he is not tall but quick and very good in the transition from defence to attack.

“He is a good dribbler as well and is an intelligent mover.

“That makes him an interesting prospect.”