Reports are out claiming that Arsenal boss Arsene Wenger was thrilled for Mesut Ozil after his outstanding display against Aston Villa on Sunday. 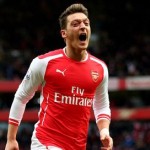 The Germany international produced a Man-of-the-Match display as the Gunners hammered Villa 5-0 at the Emirates Stadium to return to fifth on the Premier League table after being temporarily dislodged by north London rivals Tottenham.

Ozil delivered a brilliant volleyed flick for Olivier Giroud to open the scoring in the 8th minute before doubling his side’s advantage with a neat angled finish across Villa keeper Brad Guzan after being released by Giroud in the 56th minute.

The former Real Madrid has struggled with injury this season but Wenger felt his showing in the domination of Villa will put him in good stead for the remainder of the campaign.

“He got back to competition and it takes you a while to get back to that sharpness and that competitive edge, but he is getting there.”


Next Year I Will Still Be A Chelsea Player – Didier Drogba