Reports are out claiming that Arsenal boss Arsene Wenger is expected to make some changes for this week’s Champions League clash with Olympiakos. 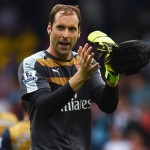 According to the Daily Express, Wenger could rest some key players for the visit of the Greek champions on Tuesday night as he looks ahead to the Premier League meeting with current leaders Manchester United on the weekend.

The likes of Petr Cech, Aaron Ramsey and Per Mertesacker could be left out of the starting line-up for the Emirates Stadium fixture with David Ospina, Francis Coquelin and Gabriel Paulista to take their places in the eleven.

Of the expected alterations, Wenger said: “Some players had two tough games at Tottenham and at Leicester where they were a high level physically.

“I will have to analyse that and make my decisions.”

Arsenal currently sit third on the Group F table having lost their opening fixture to Croatian champs Dinamo Zagreb a fortnight ago when Olympiakos were beaten 3-0 by Bundesliga giants Bayern Munich.