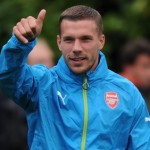 It has been reported that Arsenal boss Arsene Wenger has been chasing new signing Danny Welbeck for much of the summer.

Last night, the French tactician has made a dramatic move to solve his lack of goal power by agreeing a £16million deal to sign Manchester United striker Welbeck.

The Daily Mail says Wenger originally had Welbeck earmarked as a possible replacement for Lukas Podolski, who was set to leave Arsenal earlier this summer.

But with Arsenal so short of striking options following Giroud’s serious ankle injury, he will be asked to play in a central role for the Gunners.

Welbeck, who has 26 caps for England at the age of 23, has eight international goals. He has scored 20 league goals in 90 appearances for United since 2008.