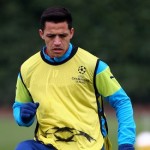 Arsenal boss Arsene Wenger has admitted that he is keen to withdraw Alexis Sanchez from the frontline.

The French tactician fears Alexis Sanchez is running out of steam and is searching for the right moment to give the £32million Chile striker a well-earned break.

“He’s a bit fatigued and in a position where he has scored less,” said boss Wenger.

“I’m tempted to give him a break at some stage. I have been for a long time. It’s not that he won’t let me, I will decide that. It’s just that every game now is so important, you always have a hesitation to do it.”