It has been reported that Arsenal lost their opening Group F game away to Dinamo Zagreb and boss Arsene Wenger concedes Tuesday’s home match with Olympiakos now leaves no margin for further error. 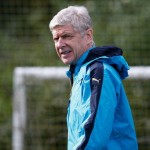 The French tactician said: “You have to win your home games if you want to qualify from the group stage, it is simple as that. We cannot afford to drop points now against anyone at home.

“Olympiakos dominates their league, they are a team with a big advantage – they dominate their league easily, so they can prepare for these kinds of games.

“They are well organised and have some players who know the Premier League, like [Esteban] Cambiasso and [Pajtim] Kasami who both played in England.”

Andrei Arshavin in Back To The Future – Video