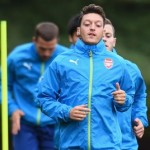 Reports are out claiming that Arsenal boss Arsene Wenger is wary of rushing Mesut Ozil’s return.

The German international playmaker is close to a return from his knee injury, but will not be rushed.

Wenger said: “Ozil has been out for three months.

“Walcott has been out for a year. People don’t realise how much time it takes to come back after such a long period.”