Reports are out claiming that Arsenal boss Arsene Wenger is intent on being patient with Aaron Ramsey and not rush the midfielder back into action too soon. 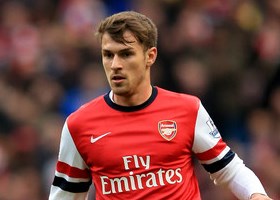 The Welsh international has not featured since coming off at West Ham on Boxing Day because of a thigh problem.

Wenger confirmed after Tuesday’s 2-2 home draw against Swansea that the Wales international had suffered a “little setback” in his rehabilitation.

Ramsey had been pencilled in for a return in Saturday’s Premier League game against Manchester City, but his comeback has now been put on hold.

Wenger said: “Ramsey is progressing well, but we need to be patient for a few more weeks.”