It has been reported that Arsene Wenger believes Alexis Sanchez’s move away from Barcelona has helped him become a star at Arsenal. 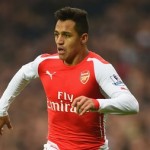 The supremely talented and hard-working Chilean has netted 14 goals in 22 outings for the Gunners since arriving from the Nou Camp where he was constantly in the shadows of superstar Lionel Messi.

Ahead of Saturday’s trip to Stoke City, Wenger spoke highly of Sanchez while indicating that former Liverpool star Luis Suarez has battled slightly since moving to Barcelona where he plays second fiddle to Messi.

“It’s not easy in a team where you have such a dominant figure as Messi,” said Wenger.

“The game naturally goes through the strong point – so in Barcelona the game goes through Messi. It means the other players become a bit more peripheral.

“You could see now when you watch Barcelona, Suarez was a super-dominant figure at Liverpool and sometimes now you think ‘Where is he?’ I’m certain he will find his place but it’s not easy for the players there.”