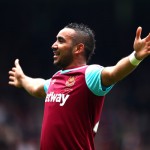 Speaking ahead of this weekend’s match between West Ham and Arsenal, Gunners boss Wenger revealed he was aware of Payet’s talent for some time.

“I’ve looked at him many times,” Wenger said. “I’ve known him for a long time. He played at St Etienne, and we watched him many times.

“He has all the attributes to be a top player, which he is, but he’s 29 years old already.

“He’s matured a lot and come back into the national team, which shows he was more consistent. He was a top talent, always, but had periods of being up and down.”