It has been reported that Arsenal boss Arsene Wenger admits David Ospina is facing three months on the sidelines. 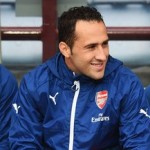 Wenger revealed concern over the recovery plan for Ospina, who suffered the setback when coming on for Wojciech Szczesny after the Pole was shown a red card during the second half of Arsenal’s 4-1 win over Galatasaray on matchday two.

“Ospina came to us injured after the World Cup, it took him two months to play again,” said Wenger.

“I had to bring him on against Galatasaray without a warm up and being prepared, so he had a recurrence of that injury.

“It means he is out for two to three months. Now we have to be really careful because it is a recurrence of a thigh injury, which is very difficult. It is a long-term injury.”