Reports are out claiming that Arsenal boss Arsene Wenger is backing Remi Garde for the Aston Villa job. 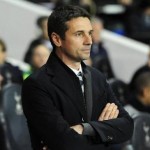 Garde is a former Gunners player and scout.

Wenger said: “I am convinced he is a front-runner. Remi is an intelligent man who is now experienced.

“He will try to get his ideas across and hopefully he can work.

“They (Villa) have five or six French players who have not all had an impact.” Arsenal Held By AC Milan In The Emirates Cup