Reports are out claiming that Gary Neville believes Arsene Wenger’s decision not to bring a true defensive midfielder to Arsenal is a sign of naivety or arrogance. 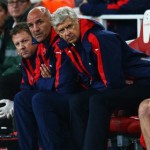 The Gunners are currently using the playmaking Santi Cazorla and the improving Francis Coquelin in the centre of midfield but former Manchester United defender Neville feels Wenger requires players of a bigger status in those positions to truly challenge for the Premier League title.

“I think they are good players, Cazorla is fantastic to watch. But I’m talking about Arsenal winning the league,” Neville explained on Sky Sports’ Monday Night Football.

“Think about (Cesc) Fabregas or a Paul Scholes when we were playing, fantastic player. You’ve got to build people around him. Facilitate what maybe they can’t do.

“To me it’s arrogance.

“I think it’s arrogance. I really do. To think that you are not going to adapt your team, to change to impact on the other teams that you’re playing against and their strengths. It is either naive, or arrogance. Because they keep losing this way. Belief? It is mis-held belief.”