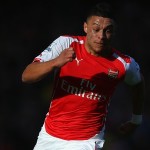 With Alexis Sanchez not due to return to training until August 3, Wenger has called on the England international winger to prove himself once again.

He said: “Alex played the first 20 games last season and was after that injured, so he is of course one of the regular players in our team.

“He is not directly always in competition with Alexis because he plays more on the right side than the left, but it is a good opportunity for him because he is not injured.

“Pre-season will be very important for him.”