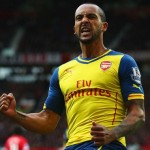 Wenger believes Walcott can emulate Ronaldo by moving inside from the wing.

“But Ronaldo always scored a lot of goals on the flanks because at Man United he played on the right, and scored 30 goals. He is top in the air, a very good header of the ball.

“That is certainly not the strength of Walcott, but the quality of his runs and his finishing is top class as well.”