Reports are out claiming that Arsenal boss Arsene Wenger was delighted with Alexis Sanchez’s goalscoring performance in victory at Watford. 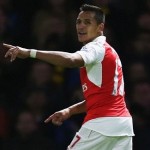 The Chile international netted his 10th goal in six appearances for club and country.

Wenger, though, had been tempted to give the industrious former Barcelona frontman a breather, having only touched down back in London late on Thursday afternoon.

“I was. Yesterday in the training session he looked quite sharp and the medical people told me he has no problem at all then I thought I would test if he is ready and if he was not ready I would take him out,” said Wenger.

“But sometimes it is easier to start the game and take the players off than when you go into the game a little bit tired because you go with the game so I decided to go for that.”

Wenger added: “Every player hates not playing, but as well you have periods as a player when you are on a scoring moment then sometimes the flow can be disturbed. That is why I leave him in.”