Arsene Wenger has revealed that he did not see Jack Wilshere’s clash with Marouane Fellaini during Arsenal’s defeat to Manchester United. 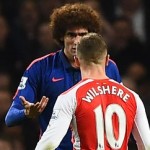 The England international midfielder threw his head into Fellaini and was fortunate to avoid a red card for his behaviour.

“Overall it was a fair game, physically committed but I didn’t see any bad things on the pitch.”