Reports are out claiming that Arsene Wenger has hinted he could leave Arsenal when his current contract expires in 2017, but not before he places the club in a position of strength for his successor. 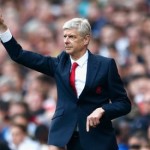 Speaking at Arsenal’s annual general meeting of club shareholders, Wenger said he wanted to do everything he can to leave a positive legacy at the Gunners.

“I am resolute to commit absolutely until the last day of my contract to bring back big success to this club, and leave as well one day in a position where it can do even better when I leave,” Wenger said.

“That is for me very important that I leave the club in the shape that the guy who comes after me can do better.