Reports are out claiming that Arsene Wenger has revealed that Alexis Sanchez is eager to impress when his former side Barcelona pay a visit to the Emirates Stadium on Tuesday night. 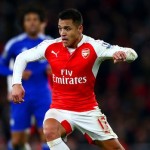 Arsenal square off against Barcelona in the blockbuster first leg of the Champions League Round of 16 encounter and the match will be a special occasion for Gunners star Sanchez due to his previous association with the Catalans.

Wenger has now gone on to reveal that Sanchez is fired up for the clash and is eager to do well on the night in a bid to give the North Londoners the advantage ahead of the return bout at Camp Nou.

Wenger said: “He will be fired up, but that doesn’t mean he will be in the right zone.

“The performance zone is where you are focused and relaxed. And that is what is difficult in sport.