Arsene Wenger has admitted that Danny Welbeck was given a start in front of Olivier Giroud mainly due to his pace. 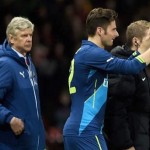 The Arsenal boss started the 24-year old England international striker in the FA Cup quarter-final against Manchester United on Monday night and it paid dividends as he scored the goal that sent the Gunners into the semi-final.

Welbeck was preferred to Frenchman Giroud, who had netted five goals in five matches prior, and Wenger explained the reasons in the wake of the Old Trafford triumph.

“He has pace,” said Wenger.

“You have as well as psychological consideration and as well I have to rotate a bit without destroying the balance of the team and I felt we had counterattacking chances and he would be ideal for that.