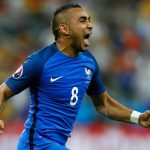 Reports are out claiming that Arsenal boss Arsene Wenger has spoken of passing on signing West Ham ace Dimitri Payet.

Talking to Konbini, when questioned about the playmaker, Wenger admits that he was interested before his switch to East London.

He said: “Yes. Often. Very often, i have to say that I asked myself that question during my career.

“And I also have to say that I decided against it because he was not consistent.

“I have never doubted that he had enough talent to play in my team.

“I have been lucky enough in my club to always have very good players in his position and it was crowded!”