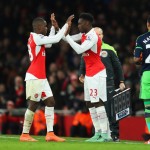 Reports have emerged claiming that Arsene Wenger disclosed his reasons for replacing Joel Campbell with Danny Welbeck as Arsenal lost to Swansea City on Wednesday night.

Costa Rica international Campbell scored the Gunners’ opening goal with a superb finish from Alexis Sanchez’s clipped pass in the 15th minute and was dangerous throughout for the North Londoners.

However, Campbell made way for Welbeck in the 64th minute much to the talented attacker’s dismay, prompting Wenger to clarify his logic behind the substitution.

“Campbell hasn’t played for a while and he started to tire,” said Wenger.

“He played against a very young left-back (Stephen Kinglsey) and I thought Welbeck could give him some problems with his runs in behind.

“These kinds of decisions don’t mean that Campbell did badly. I think he did quite well tonight. I also think that there was room on that flank to be very dangerous.”