Reports are out claiming that Arsenal boss Arsene Wenger hailed the performance of Mesut Ozil after victory over Everton. 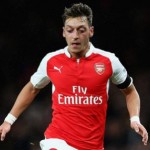 The Gunners are now top of the table.

“It is a combination of quality of the touch, intelligence and team attitude. He is a real team player, I said that yesterday in the press conference. He puts his talent at the service of the team and he wants to help the team with everything he does. That makes him efficient.”