Reports are out claiming that Arsenal boss Arsene Wenger was happy seeing Joel Campbell on the scoresheet at Swansea City. 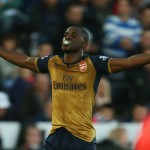 The Costa Rica international scored his first goal for Arsenal on his first Premier League start as the Gunners beat Swansea 3-0 at the Liberty Stadium.

“He had to wait, to be patient, to get a chance and he was always on the waiting list,” he told the club’s website.

“He got through a few countries but he is still very young and I never let him go as I feel he is a good player and on top of that he is a team player.

“[Against Swansea] he scored one but he could have scored more so that is something very interesting. You see when he has good players around him he is a good player.”

I Wanted To Work With Arsene Wenger Again! – Mathieu Flamini