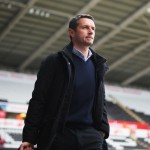 The former Gooner was sacked by Villa this week.

Wenger said this morning: “It’s disappointing because when he was appointed it was a long-term option.

“When he arrived Villa were already very weak but he wasn’t given the time to re-build.”