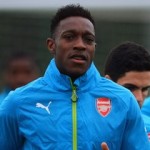 It has been reported that Arsenal boss Arsene Wenger is keen to ease the pressure on Danny Welbeck ahead of today’s meeting with Manchester United.

United boss Louis van Gaal has claimed Welbeck was “not at the standard” of Robin van Persie and Wayne Rooney.

“We do not give too much importance to that [Van Gaal’s comments,” said Wenger. “Rooney is 29, Van Persie is 31 and Welbeck is a young player. I can understand that completely. What is important is that the player makes a good career and has a good opportunity.

“You can take every challenge in a positive way and that’s what Danny did. I believe that you have to understand Louis van Gaal had not had Welbeck under his command for a long time and it’s always very difficult to know the players well when you see them for three or four weeks. Wayne Rooney and Robin van Persie have an exceptional goalscoring record — he had two quality players in front of him. What he needed was a chance.

“I always respected Danny and I always felt that he had a great future. What he has achieved in the last few months has certainly allowed him to gain more respect, especially for the English national team as well — he’s now one of the main players in the national team and he showed that again in Scotland.”