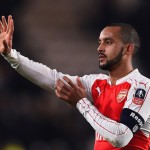 A large section of Arsenal fans believe the 27-year-old should be moved on when the transfer window reopens.

But Wenger says: “I like that we live in a society where people always want new faces and new names, but we forget sometimes the loyalty, cohesion and the long-term phase that is needed in a player to be successful at the club.

“You need players through the generations and I’m very pleased with him.

“He’s been here for 10 years, that shows as well that he loves Arsenal and I’m convinced he will give us much more in the next five years than the last five because he is a player who is always moving forward and trying to do better. He has a very positive attitude.”