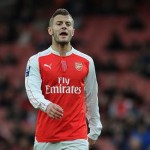 Wilshere is expected to play for Arsenal Under-21s on Monday in their crucial game against West Bromwich Albion.

“I think he needs one more game at least,” the manager said. “He will play again with the under-21s on Monday. He should be involved in that.

“Then I will have to see how he compares to the other competitors in the first team. Once he is through three or four games then of course you consider him.”