Reports are out claiming that Arsenal boss Arsene Wenger had nothing to say about Louis van Gaal’s swan dive during defeat at Manchester United. 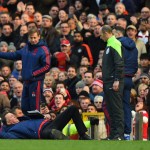 Van Gaal threw himself to the ground under fourth official Mike Dean’s nose in an attempt to illustrate his frustration at alleged diving by Gunners striker Alexis Sanchez.

With Wenger standing only yards away and trying hard not to react, Van Gaal continued to argue with Dean while lying on the floor.

Asked his thoughts on Van Gaal’s antics, Wenger offered a wry smile and said: “Nothing.

“You will have to ask him the question. I do not want to comment on that because you will say I’m a bitter loser – I am, in fact.”